When looking for your next kitchen knife, it can be hard to know where to start with the massive variety available. These two incredibly useful knives which have been used for centuries are the Chinese Cai Dao and the Japanese Nakiri.

While both knives have a specific country of origin, they are utilized worldwide because of how useful they are.

Despite both of these iconic Asian knives having a distinct rectangular shape, they are by no means the same knife and have many distinguishing qualities.

So I’m going to break down what the different uses of these knives are and what makes them different from each other. This way, you can see which knife could be useful to you for any particular kitchen tasks you may need them for!

But first, let's do a quick pros and cons for each. 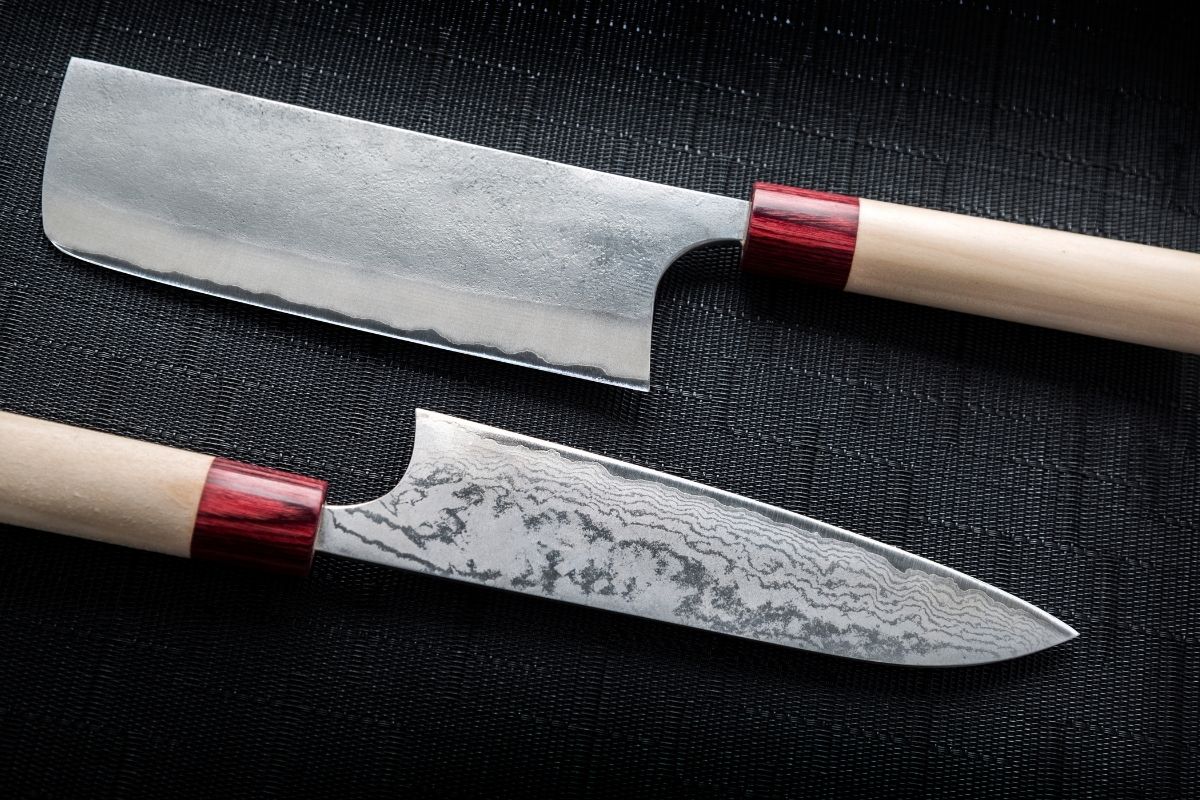 What Is A Cai Dao Knife?

A Cai Dao, which is often referred to by western users as a ‘Chinese Cleaver’ because of its appearance, is actually a misleading mistranslation.

Despite how the blade looks like a traditional western image of a cleaver, these blades are a lot more lightweight and are unsuitable for traditional cleaving jobs like cutting through bones.

The more accurate translation and use of a Cai Dao are as a ‘slicer’. The main intention of a Cai Dao is precise, efficient slicing. In spite of the knife not being suitable for more heavyweight cleaver jobs, it is perfect for just about everything else.

This massively versatile knife can be used for prepping vegetables, cutting meat, and sometimes even more delicate precision work.

This is made possible by holding the blade in a ‘pinch’ grip between the thumb and forefinger and using the other fingers to support the handle.

The efficient chopping is possible because of the thick edge of the blade at the top allowing for easy support and the thin blade at the bottom for maximum precision.

What makes this blade even more useful for chopping and slicing work is how the size of the rectangular blade makes it easy to move your food.

It is possible to stop chopping and slide the blade along the board to pick up whatever you have been chopping and transfer it to a pan, pot, or wok. This feature is just another aspect of the Cai Dao which makes it a favorite for so many chefs.

Drawbacks Of The Cai Dao

Possibly the biggest disadvantage of the Cai Dao is the significant learning curve to overcome to become proficient at using this traditional knife.

The grip needed and the specific motion of slicing can feel harsh, unnatural, and uncomfortable to those not used to using that style of blade.

Because of this, some chefs who know the advantages of using a Cai Dao choose not to because of not having the time or the willingness to dedicate the effort to learn a brand-new technique.

Also, getting a new knife is an investment of money as well as time, so unless users have had the opportunity to properly demo and try out the knife, it can feel like a risk to invest.

It can be a difficult prospect to overcome, having the potential to spend a significant amount on a high-quality knife to just not be able to learn how to use it.

As previously mentioned, this blade, while being versatile, is not perfect for everything. Especially heavier tasks like cleaving, if that is what you are looking for, do not be fooled by appearances and select a Cai Dao.

What Is A Nakiri?

This Japanese knife, while looking similar to the Cai Dao, is significantly smaller and lighter. This knife is similar to a standard chef's knife but is often described as missing the last third of the blade, not having a pointed edge.

The shape of the blade means that instead of the sharp edge being angled, it is completely flat, making chopping with this knife incredibly efficient with no need for any horizontal motion.

Because of the lightweight of this blade, its primary use is for vegetable preparation. And for this role it is perfect. Compared to the Cai Dao it is significantly easier to learn to use, potentially because of its similarity to standard chef’s knives.

The weight of the blade has led to users of the knife complementing its nimbleness and satisfying speed at preparing vegetables.

So despite having a quite specific niche, the importance of an efficient vegetable preparation knife can not be understated.

Vegetables are a foundational element of a lot of culture's cuisine, and the seemingly simple act of vegetable preparation can take up a majority of the cooking time. Because of this, having a knife perfect for this job is an essential asset.

Drawbacks Of The Nakiri

If you are looking for a multifunctional, all-in-one, all you need knife, the Nakiri is not what you are looking for. While this knife can be used for other tasks than vegetable preparation, there will nearly always be a better knife for the job.

It is not recommended to attempt to use this knife for much more than vegetables because of its lightweight design. With such a delicate blade meant for a specific use, it is not worth ruining it on something it is not intended for.

Also, if you want to cut something which requires a horizontal slicing motion, then the Nakiri is certainly not the right choice. With the flat edge of the blade, this knife is simply not designed for that style of cutting.

Finally, if you would simply prefer to stick to a standard chef’s knife for vegetable preparation, and you don’t think you need to get any more efficient, there may not be a need to upgrade to a Nakiri 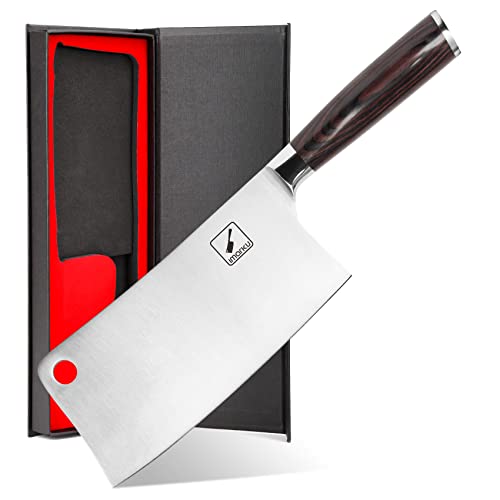 This 7-inch Cai Dao is perfect for all the typical uses a Cai Dao is needed for, and at an affordable price point, it isn’t too risky for those unsure if they will be able to pick it up easily.

Compared to other more budget-friendly Cai Dao’s, the Imarku has a much more sleek high-quality design and is generally a longer-lasting option. 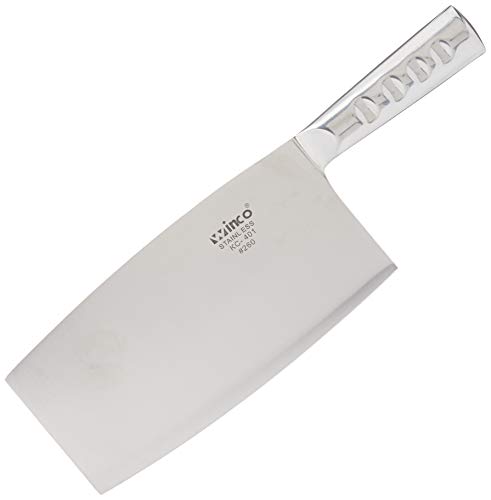 This is probably the most low-budget-friendly option available, and by not featuring a wooden handle, this knife is completely dishwasher safe.

While this is the most affordable option, the handle has been reported uncomfortable by a lot of users and some have said that the blade may need extra sharpening. 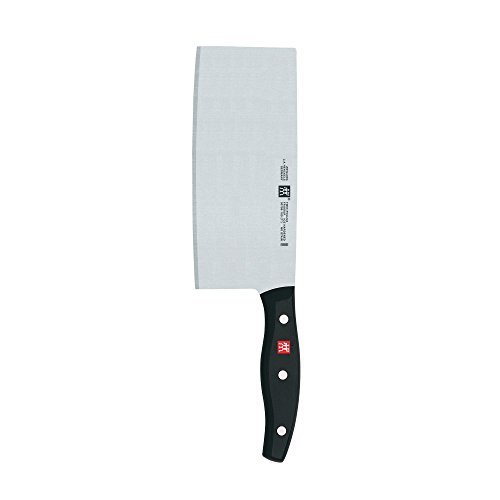 While this is the most luxury choice listed, it definitely justifies its price. This heavier knife is the most durable listed. And as well as this, it is also dishwasher safe.

The German design has been reviewed as an unconventional ergonomic take on the traditional design. However, it is by no means a necessity and there are budget options that can do a similar job

This Nakiri is a comfortable, well-balanced blade, especially for its price. It has a nice, sizable wooden handle to give the delicate blade a sturdy grip.

However, it is not perfect, the edge has been reported to not always work perfectly, and while the handle is easy to get a grip on, the lack of a luxurious finish makes it sometimes rough to hold. 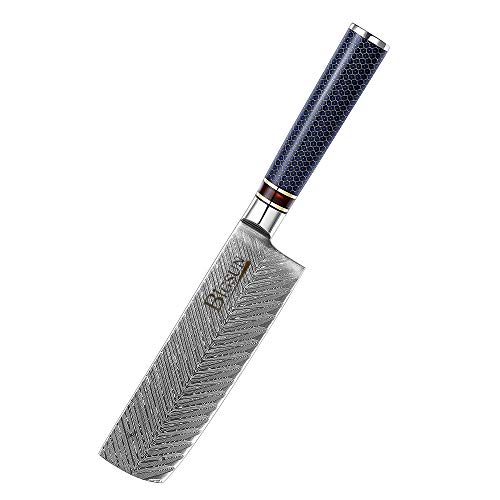 This mid-range Nakiri has been praised for its proficient handling, being one of the easiest of the blade type to pick up and use. And the dimpled lower half of the blade reduces the chance for food to stick, ensuring maximum efficiency.

Despite this, the blade is a little heavier than average, making it less desirable for a Nakiri. The resin details on the grip, while aesthetically pleasing, have been reviewed as uncomfortable. 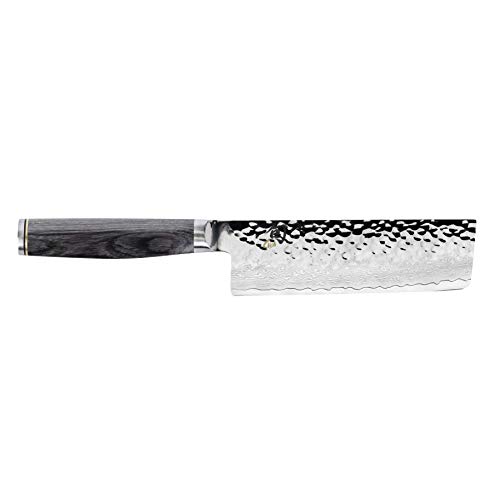 This Nakiri is the ultimate luxury option, perfect for all chopping that is expected of Nakiri. The design is perfectly balanced and can remain sharp for longer than cheaper options. This makes this blade feel heavenly to control.

Unfortunately, this has all the drawbacks of a typical luxury blade — it can be more fragile, needing to be looked after properly.

And of course, this blade is not intended for beginners, with a price hard to justify for that demographic.

Final Thoughts: Which Is Best For You?

If you are willing to dedicate your time and a small monetary investment to learning an incredibly efficient way to chop a large variety of foods, the Cai Dao is a worthy decision.

However, if you are looking for a blade specifically for chopping vegetables, and you have less time to invest in perfecting techniques, then choosing a good Nakiri is a perfect choice.

Tom Bower
Hi, my name is Tom Bower and I have had a passion for knives since I was in my early 20s. I moved out on my own and started collecting my own furniture, utensils, and hobbies. Not only do I have a passion for cooking, but I also love being outdoors in adventure mode.

I have dedicated part of my life to finding my favorite knives for different occasions. Have you ever tried to cut through a steak with a blunt knife? Or a rope with a low-quality pocket knife? Once you get a taste of quality, you’ll never go back to what you knew before.